AmeriCorps National Civilian Community Corps (AmeriCorps NCCC) Southern Region named United Way of Southwest Alabama (UWSWA) their 2020 New Sponsor of the Year at their recent Week of Celebration – Sponsor Awards. AmeriCorps NCCC Assistant Program Director Tamika Eatmon praised UWSWA for providing the River2 Team enriching service opportunities and learning experiences. One of the volunteers said, “they [UWSWA] were a dream to work with, as they would meet my team where they were at, and support us as an entire group.”

“Mentoring six young adults and shepherding them through a complex project was fun, and our team really came through for us,” Martin said. “At the time that COVID-19 put our filing season on hold, we had prepared approximately 700 returns, which would not have been possible without the weeks that our NCCC team gave us. They took on a big responsibility, and they really impressed our staff and volunteers with their commitment and their learned knowledge.”

UWSWA hosted the River2 team of AmeriCorps NCCC volunteers based out of Vicksburg, MS for eight weeks and provided them with meaningful volunteer opportunities during their stay. Their main assignment was to the VITA program.

In order to be a VITA volunteer, each team member trained and tested to become certified volunteer tax preparers. They also assisted opening the UWSWA tax sites and upgrading the sites’ software. Once the sites were open, the team spent three weeks preparing taxes and had the opportunity to work in various locations throughout Mobile in variety of roles in the tax preparation process.

In addition working with the VITA program, the team was able to utilize Volunteer Connect to engage in other volunteer projects with several of our partner agencies including Feeding the Gulf Coast and Goodwill Easterseals of the Gulf Coast as well as other local non-profits like Dauphin Island Sea Lab. 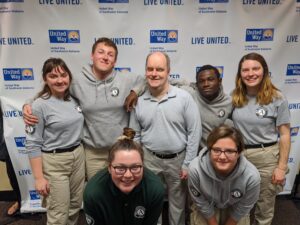 AmeriCorps is a network of national service programs made up of three primary programs that each take a different approach to improving lives and fostering civic engagement. Members commit their time to address critical community needs like increasing academic achievement, mentoring youth, fighting property, sustaining national parks, preparing for disasters, and more 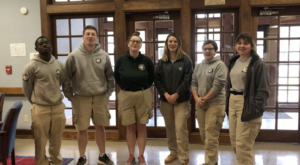 AmeriCorps NCCC is a full-time, residential, team-based program for young adults to travel the country and complete hands-on service projects. This program has two distinct service tracks: Traditional Corps and FEMA Corps. Members strengthen communities and develop leadership skills through direct, team-based service. Members live with young adults from around the country, embark on adventure, and build their resumes . Whether clearing trails for a national park or building homes for families in need, members engage in a variety of projects and have one-in-a-lifetime experience.