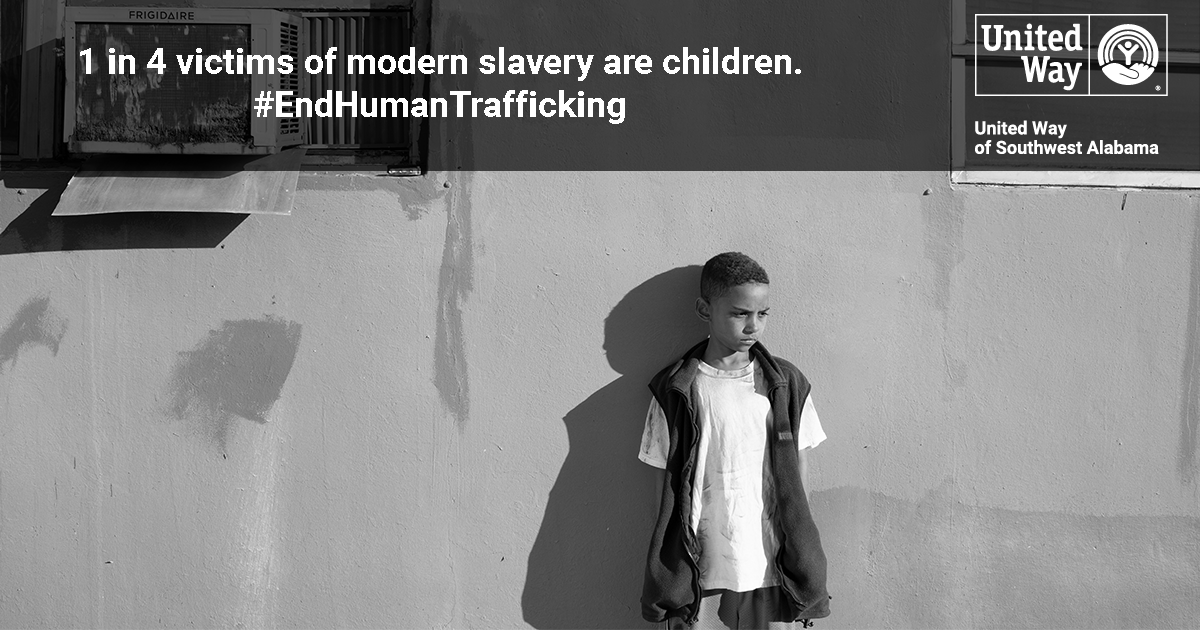 ALEXANDRIA, VA (July 29, 2020) – In support of the United Nation’s World Day Against Trafficking in Persons, July 30, United Way Worldwide is announcing new efforts supported by UPS to fight the fastest growing criminal enterprise in the world, including a ground-breaking approach that galvanizes communities in new ways to detect, stop and prevent human trafficking. The partnership is fueled by a $3 million fund, seeded by UPS employees who provided charitable contributions for these efforts for the past two years as part of the organization’s giving program.

Led by United Way and funded by UPS employees, this comprehensive approach convenes community leaders – including relief and human service agencies, medical providers, local government, employers, advocates, citizens and more – around the singular issue of fighting local human trafficking, in many cases, for the first time. Through this collaboration, they’re identifying needs and gaps at the community level, including housing, services, training and policy.

“Human trafficking is one of the world’s most tragic and overlooked issues, affecting millions of people in cities and countries everywhere,” said Brian Gallagher, President and CEO of United Way Worldwide. “Fighting back against it takes a collaborative effort across all sectors of society, and our partnership with UPS reflects our joint commitment to helping vulnerable individuals in communities large and small. We’re proud to partner with UPS on this critical effort – one which reminds us of the importance of fighting for every person in every community.” This initiative builds on UPS’s existing partnership with Truckers Against Trafficking, aimed at training all UPS drivers to spot the signs of trafficking and report them to appropriate authorities.

“Our goal is to make sure every UPS driver in the U.S. has the knowledge needed to spot and report on signs of trafficking,” said George Willis, president of UPS U.S. Operations. “We know that reliable tips to law enforcement are critical to making arrests and rescuing victims,” Willis continued. UPS’s new Brakes on Trafficking Steering Committee, led by Willis and comprised of leaders from across the organization, will help strengthen the company’s strategic approach to ending human trafficking.

The expanded partnership with United Way is an example of how the company is stepping up its efforts to strengthen communities, particularly in Black and other communities of color, where victims of trafficking often get recruited. In fact, the U.S. Department of Justice estimates that more than 68 percent of human trafficking victims are people of color.

United Way and UPS’s innovative approach is being piloted in Atlanta; Las Vegas; Louisville, Kentucky; and Brownsville, Texas. Each of the programs will focus on addressing issues identified by the local United Ways as needing greater support, including housing (Atlanta); building stakeholders in poverty-stricken communities (Brownsville); the intersection with child abuse and neglect (Louisville); and tackling trafficking in a community with a prevalent commercial sex market (Las Vegas). The two-year pilots will be overseen by the United Way Center on Human Trafficking and Slavery. The end result will be community-based strategies that can be adapted across the world.

The pilot program is one of the key initiatives emerging from the new impact fund launched by United Way, United Against Human Trafficking, which is dedicated to expanding the research- and community-based efforts to find, stop and prevent human trafficking. The fund will invest in training, policy advocacy and community mobilization around human trafficking. United Way and UPS, partners in human trafficking prevention for more than four years, are also stepping up their collective efforts to include virtual training of community leaders to identify and stop human trafficking building a “train-the-trainer” program, piloted by local United Ways and 400+ community leaders in Atlanta, Denver, Milwaukee, San Francisco and San Jose. Additionally, the investment will support a new United Way partnership with the UN’s International Labor Organization that will conduct rigorous research to develop a global blueprint of comprehensive interventions required to end forced labor and human trafficking and costing model to better understand costs to bring these efforts to scale around the world. The ILO estimates that profits generated from forced labor add up to $150 billion annually. That amounts to a greater daily profit than the global community spends to combat human trafficking over the course of an entire year. This two-year project will build on data and practice gleaned from stakeholders from around the world.

UPS’s leadership in the fight against human trafficking began in 2016. Since that time, the company has extended awareness training to more than 100,000 employees, provided systemic program investments, connected to local community-based partners and convened public private partnerships around the nation. The UPS Foundation, which leads the global citizenship programs for UPS, has also allocated new funding of more than $530,000 in additional support for non-profit organizations leading the fight to combat human trafficking and support those impacted.

United Way for its part is pushing hard at the state and local level for meaningful change, too. As an example, after realizing that young women were being trafficked through Georgia, where UPS is headquartered, United Way of Greater Atlanta and its women volunteers, Women United, fought to get an initiative on the statewide ballot. Women United took on the challenge of educating Georgia citizens that despite its global reach, human trafficking takes place locally. In 2016, Georgia voters passed the State Constitutional Amendment for the Safe Harbor for Sexual Exploited Children Fund. This created a dedicated source of funding to support minors who are survivors of sex trafficking, and supports restorative services like safe housing, trauma counseling and medical treatment.