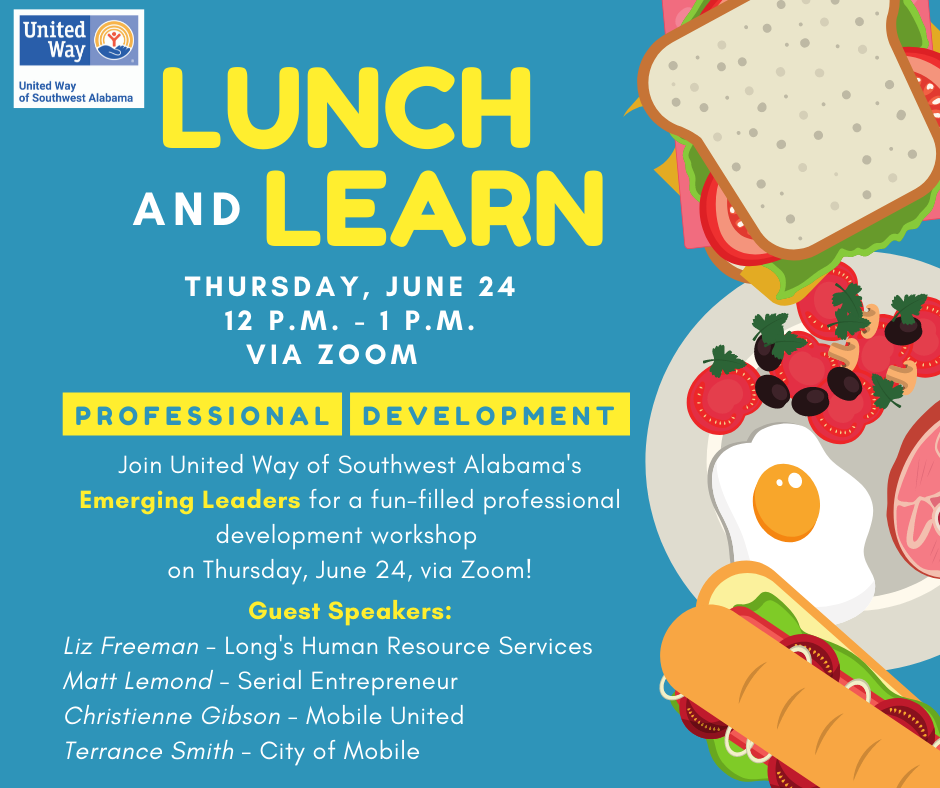 United Way of Southwest Alabama’s Emerging Leaders is hosting our second Lunch and Learn of the year. This professional development workshop will consist of a panel of accomplished Mobilians, break-out rooms, and a Q&A session. 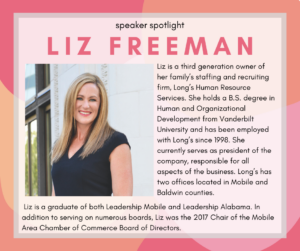 Liz is a third-generation owner of her family’s staffing and recruiting firm, Long’s Human Resource Services. She holds a B.S. degree in Human and Organizational Development from Vanderbilt University and has been employed with Long’s since 1998. She currently serves as president of the company, responsible for all aspects of the business. Long’s has two offices located in Mobile and Baldwin counties.

Liz is a graduate of both Leadership Mobile and Leadership Alabama. In addition to serving on numerous boards, Liz was the 2017 Chair of the Mobile Area Chamber of Commerce Board of Directors. 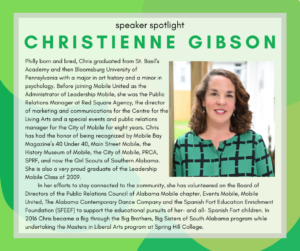 Philly born and bred, Chris graduated from St. Basil’s Academy and then Bloomsburg University of Pennsylvania with a major in art history and a minor in psychology. Before joining Mobile United as the Administrator of Leadership Mobile, she was the Public Relations Manager at Red Square Agency, the director of marketing and communications for the Centre for the Living Arts and a special events and public relations manager for the City of Mobile for eight years. Chris has had the honor of being recognized by Mobile Bay Magazine’s 40 Under 40, Main Street Mobile, the History Museum of Mobile, the City of Mobile, PRCA, SPRF, and now the Girl Scouts of Southern Alabama. She is also a very proud graduate of the Leadership Mobile Class of 2009.

In her efforts to stay connected to the community, she has volunteered on the Board of Directors of the Public Relations Council of Alabama Mobile chapter, Events Mobile, Mobile United, The Alabama Contemporary Dance Company and the Spanish Fort Education Enrichment Foundation (SFEEF) to support the educational pursuits of her- and all- Spanish Fort children. In 2016 Chris became a Big through the Big Brothers, Big Sisters of South Alabama program while undertaking the Masters in Liberal Arts program at Spring Hill College. 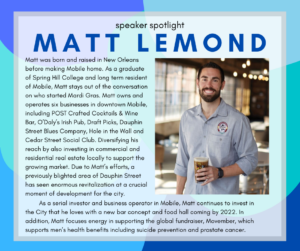 Matt was born and raised in New Orleans before making Mobile home. As a graduate of Spring Hill College and long-term resident of Mobile, Matt stays out of the conversation on who started Mardi Gras. Matt owns and operates six businesses in downtown Mobile, including POST Crafted Cocktails & Wine Bar, O’Daly’s Irish Pub, Draft Picks, Dauphin Street Blues Company, Hole in the Wall and Cedar Street Social Club. Diversifying his reach by also investing in commercial and residential real estate locally to support the growing market. Due to Matt’s efforts, a previously blighted area of Dauphin Street has seen enormous revitalization at a crucial moment of development for the city.

As a serial investor and business operator in Mobile, Matt continues to invest in the City that he loves with a new bar concept and food hall coming by 2022. In addition, Matt focuses energy in supporting the global fundraiser, Movember, which supports men’s health benefits including suicide prevention and prostate cancer. 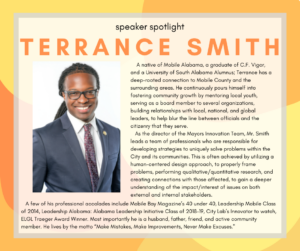 A native of Mobile Alabama, a graduate of C.F. Vigor, and a University of South Alabama Alumnus; Terrance has a deep-rooted connection to Mobile County and the surrounding areas. He continuously pours himself into fostering community growth by mentoring local youth, serving as a board member to several organizations, building relationships with local, national, and global leaders, to help blur the line between officials and the citizenry that they serve.

As the director of the Mayors Innovation Team, Mr. Smith leads a team of professionals who are responsible for developing strategies to uniquely solve problems within the City and its communities. This is often achieved by utilizing a human-centered design approach, to properly frame problems, performing qualitative/quantitative research, and creating connections with those affected, to gain a deeper understanding of the impact/interest of issues on both external and internal stakeholders.

For more information about this event or Emerging Leaders, contact Emily Stewart at estewart@uwswa.org or 251.769.2424.