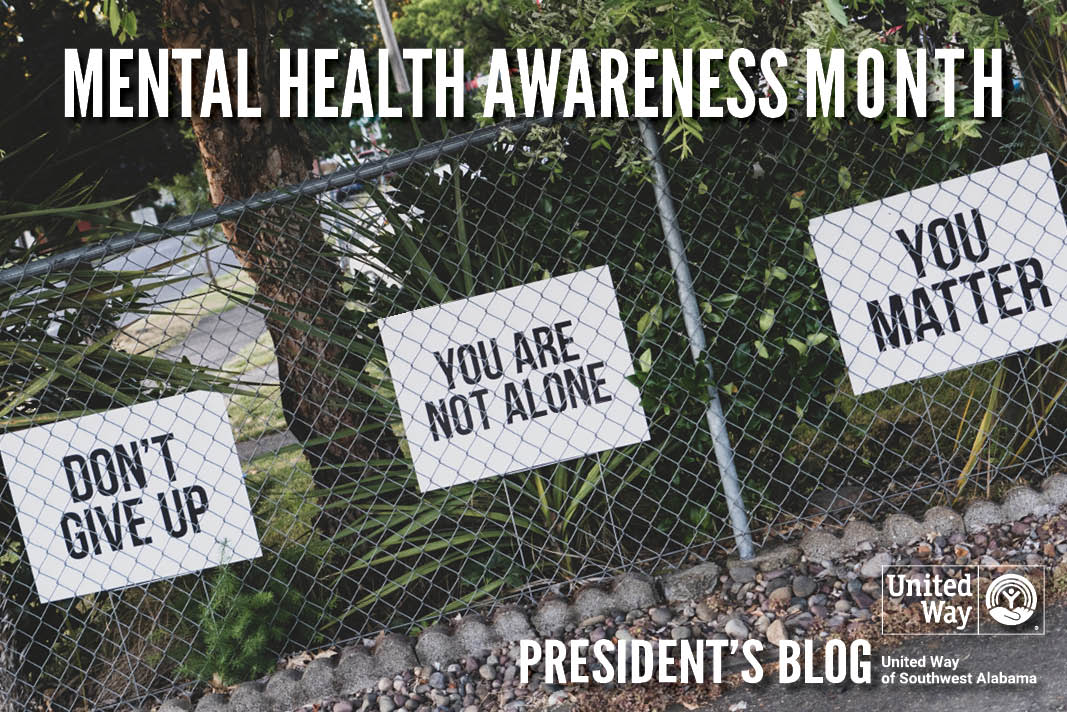 May is National Mental Health Awareness Month. According to Mental Health America’s 2021 The State of Mental Health in America, Alabama ranks 40th in the nation for mental health. The report paints a bleak picture of mental health not only for Alabamians but for Americans. Listed below are some staggering statistics from the report.

Youth mental health is worsening. 9.7% of youth in the U.S. have severe major depression, compared to 9.2% in last year’s dataset. This rate was highest among youth who identify as more than one race, at 12.4%.

Even before COVID-19, the prevalence of mental illness among adults was increasing. In 2017-2018, 19% of adults experienced a mental illness, an increase of 1.5 million people Suicidal ideation among adults is increasing. The percentage of adults in the U.S. who are experiencing serious thoughts of suicide increased 0.15% from 2016-2017 to 2017-2018 – an additional 460,000 people from last year’s dataset.

More people are reporting frequent thoughts of suicide and self-harm than have ever been recorded in the MHA Screening program since its launch in 2014. Since the COVID-19 pandemic began to spread rapidly in March 2020, over 178,000 people have reported frequent suicidal ideation. 37 percent of people reported having thoughts of suicide more than half or nearly every day in September 2020.

Young people are struggling most with their mental health. The proportion of youth ages 11-17 who accessed screening was 9 percent higher than the average in 2019. Not only are the number of youth searching for help with their mental health increasing, but throughout the COVID-19 pandemic youth ages 11-17 have been more likely than any other age group to score for moderate to severe symptoms of anxiety and depression.

In acknowledgement of Mental Health Awareness Month, the National Alliance on Mental Health is running the campaign You Are NOT Alone.  According to the Alliance, “Now, more than ever, we need to find ways to stay connected with our community. No one should feel alone or without the information, support and help they need.”

United Way of Southwest Alabama’s 2-1-1 provides that support.  UWSWA’s 2-1-1 collaborates with health and human service organizations in Choctaw, Clarke, Mobile and Washington Counties to address, among many things, mental health.  UWSWA’s 2-1-1 connects callers to trained specialists who use a comprehensive database to provide access to resources and programs for the prevention and treatment of mental illness. The network empowers all individuals with the information they need to access help and to offer hope.

With UWSWA’s 2-1-1, You Are NOT Alone. Please call and get the help you or a loved one needs.